Amid a crisis of inequality, $2 trillion of tax-free investing in Opportunity Zones could benefit both rich and poor

How can a formerly failing freshman in a South Carolina high school ultimately build a path to prosperity for millions of poor people nationwide? Through the U.S. tax code, of course.

Born into poverty in North Charleston, South Carolina, and raised by a single mother, Tim Scott struggled economically and educationally early in life, like many of the 39 million low-income Americans facing a poverty threshold of $25,750 per year for a family of four. Ultimately, Scott found a mentor, graduated high school and college, built a business and subsequently served on the city council and in the state legislature, and became the only African-American to become both a U.S. Representative and Senator.

According to the U.S. Department of Housing and Urban Development, “low income” census tracts have “at least 50% of households with an income less than 60% of the Area Median Gross Income (AMGI).” Some OZs are in higher-population counties (such as Bronx County in New York, with 25% of residents, or Milwaukee, Wisconsin county — 10% of residents). Some OZs are in rural counties with less than 3,000 people (like Baca County in Colorado, with 57% of residents, or 72% of residents in Modoc County, California). All of Puerto Rico qualifies, including three major counties of San Juan, Bayamon and Carolina, totaling more than 700,000 people, with median income of $19,775.

However, with Opportunity Zones chosen by governors, some OZs may not be as needy. While Loving County in Texas has an OZ, its 82 people have the highest income per capita in Texas. Downtown Houston neighborhoods have also qualified as OZs in Harris County, Texas. 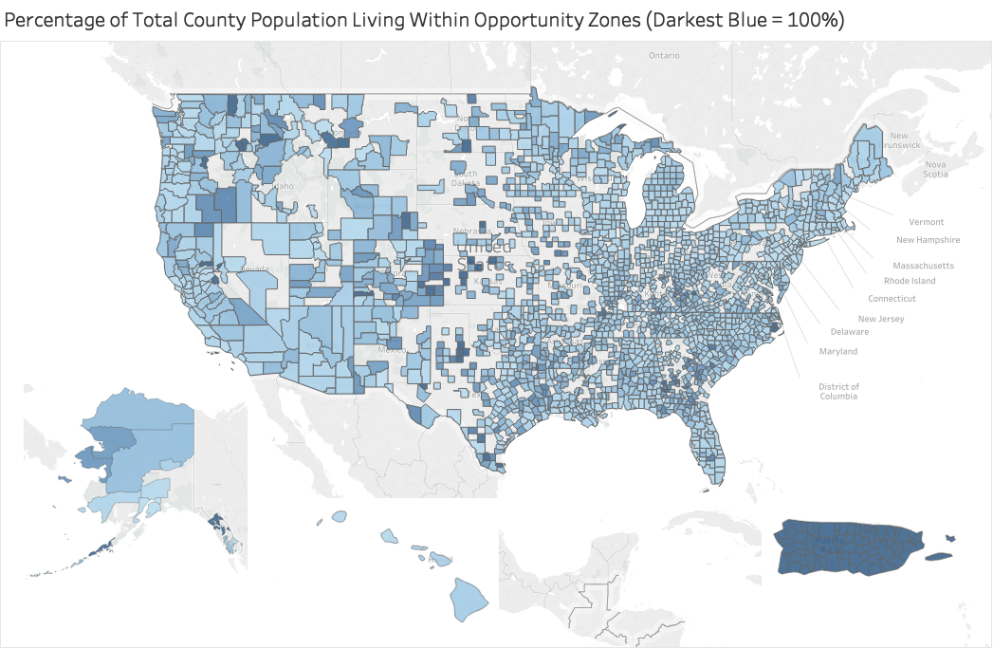 More than $2 trillion in unrealized gains sit on the ledgers of investors and corporations, according to the Economic Innovation Group, based in Washington, D.C., and partly funded by investor Sean Parker of Napster and Facebook fame. Investing directly in 8,700 Opportunity Zones (or 1 in 8 U.S. Census tracts) for 10 years or more would eliminate any federal taxes due on those gains – and potentially reduce poverty via job creation and income growth related to those investments.

So where can investors deploy their capital today? The IRS is formalizing rules and policies, so capital is generally not yet flowing, though a wave of Opportunity Zone fund offerings is emerging. Investors seeking impact and profit are optimistic — and cautious.

“Opportunity Zone investments that align with the spirit and integrity of uplifting historically marginalized communities, empowering them to catalyze, drive, own and operate the community investment” is what impact investors are seeking, he said.

More than 50% of the investment gains should stay in the community.
Kristin Hull
CEO AND FOUNDER OF NIA IMPACT CAPITAL

Yet Glass also cautions that “we need to avoid Opportunity Zone investments focused solely on gentrification, driving up real estate values and displacing the local community.”

Previous government tax-code incentives have helped low-income neighborhoods attract more capital. The 1977 Community Reinvestment Act mandated commercial banks to invest locally — and track results. But the Tax Cuts and Jobs Act does not specify any required outcomes such as reduced poverty rates or jobs created. Nor does it require serving one or more of the United Nations’ 17 “Sustainable Development Goals,” a global framework for impact investing.

“The big policy question is whether Opportunity Zone investments will move beyond simply driving capital to low-income census tracts and actually improve the lives of those who live there,” said Steve Godeke, a strategic advisor to foundations, families and asset managers pursuing impactful portfolios. “While there are no reporting or impact measurement requirements in the current regulations, we are relying primarily on the self-interest of investors not to abuse the system.” 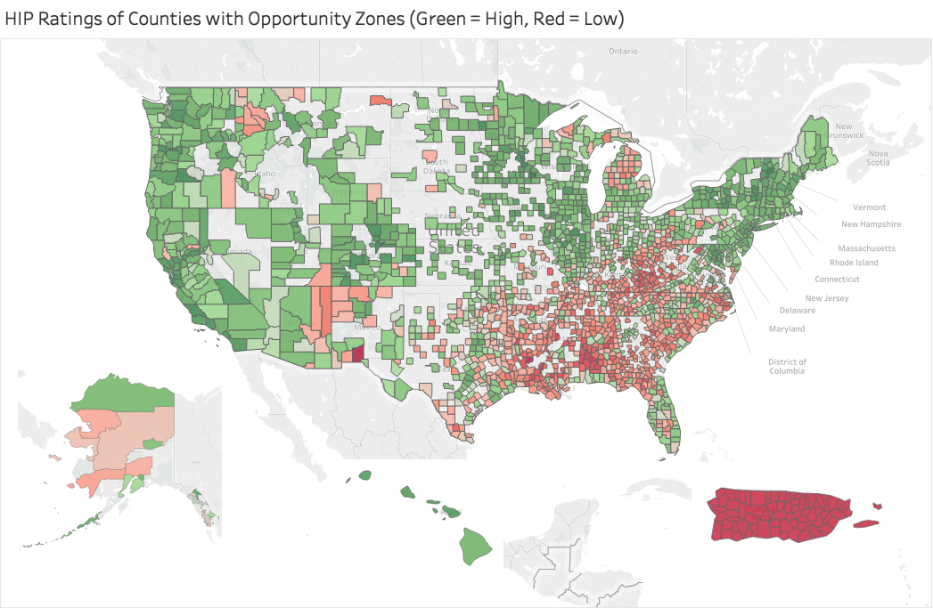 Impact investor and portfolio manager Kristin Hull said that “more than 50% of the investment gains should stay in the community.” Hull, CEO and founder of NIA Impact Capital — which prioritizes investments that benefit women — would prefer the tax code and IRS policy mandate that OZ funds and gains remain in the community and create more local wealth-owners to truly break the cycle of poverty.

Opportunity Zone investors can work directly with local networks that already bring together “overlooked entrepreneurs,” Hull noted, such as the Impact HUB of Oakland and the Business Alliance for Local Living Economies.

Weekly advice on managing your money
SIGN UP NOW

Get this delivered to your inbox, and more info about about our products and services.
By signing up for newsletters, you are agreeing to our Terms of Use and Privacy Policy.

As each state’s or territory’s governor was empowered to select the specific zones, “we can expect a mixed bag of results,” said Godeke, as criteria of rural versus urban and use of public lands varied. “Over time, Opportunity Zones could become more integrated into CRA, New Markets Tax Credits, and Low-Income Housing Tax Credit programs, and also co-invest with several foundations who are seeding OZ funds, providing loan guarantees and funding training.”

For example, Kresge Foundation has committed $22 million in guarantees of principal protection to back the Opportunity Zone Funds of Arctaris and Community Capital Management, which will include high transparency, performance reporting and accountability to desired social goals — like affordable housing and living wage jobs. More impact metrics developed by Kresge Foundation and partners are documented in its Opportunity Zones Reporting Framework.

Just as the Scarecrow, Tin Man and Lion in “The Wizard of Oz” sought out brains, heart and courage, so, too, can OZ investors open up more pathways for the poor to escape poverty while pursuing higher-impact, tax-free returns over a decade to possibly enrich investors’ portfolios.

— By R. Paul Herman, CEO and founder of HIP Investor, and Noah Strouse investment analyst at HIP Investor. HIP Investor is a provider of 123,400 impact/ESG ratings and investment manager of impact/ESG strategies and portfolios since 2006. Herman is also author of “The HIP Investor: Make Bigger Profits by Building a Better World.”